Establishment and Purpose of The Trust

The Colmcille Trust was established on 26th July 1991, the purpose of the Trust being to further the cause of Christian unity by the development and eventual establishment of a permanent Roman Catholic presence on the Isle of Iona (click here to read the Trust Declaration).

The Search For A Suitable Property

Mary Burn-Murdoch, whose family have had a house on Iona since the early 1930s, began her search back in 1987 for a place where Mass could be celebrated regularly. Previously the priest would travel from Oban to Tobermory and Bunessan, but the Bunessan Mass was discontinued in 1986, which meant that any Catholics from Iona and Bunessan area had a round trip of over 100 miles to go to Mass.  Following the foundation of the Colmcille Trust by Mary in 1991 and a long search for a suitable property, the Trustees in 1996 purchased the house 'Kilona', with its splendid view over the sound of Iona towards Mull, and rebuilt it from the foundations.

The Building of Cnoc a' Chalmain

Charles Hughes from Chichester was the architect: a Trustee who donated all his services free. Charles, a Scot from Dundee who gained his Master's degree in Scottish architecture, spent much time and patience getting the feel of Iona and the other buildings there. He decided on the builders, Norman MacDonald of Tobermory, whose work he had admired elsewhere on the island. The Hon. Mrs Frances Shand Kydd, who joined the Trust in 1994, worked as the Appeals Secretary until 2004. She worked tirelessly and enthusiastically to raise the cost of building Cnoc a' Chalmain. Donations flowed in from all over Britain and indeed all over the world, due to articles and features about the project in high-profile magazines and newspapers. Callum Kennedy was the fourth of the original Trustees, a lawyer whose specialist knowledge of trusts was invaluable.

His Eminence Archbishop Keith Patrick (now Cardinal) O'Brien of St Andrews and Edinburgh, who was at that time the Administrator of the Catholic diocese of Argyll and the Isles, blessed and dedicated the House of Prayer on April 15th 1997. 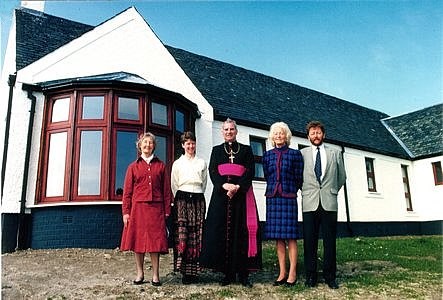 on the occasion of the Opening on 15th April 1997
[Absent: Mr Callum Kennedy, WS (Trustee)]

Thus was established a permanent Catholic presence on Iona for the first time in 400 years. From this position, the Catholic Church has complete commitment to work for unity among Christians. The Papal Encyclical on commitment to Ecumenism, produced in 1995, encourages us to seek new ways of working together and praying together. Without this commitment, we cannot be authentically true to the Gospel of Jesus Christ. 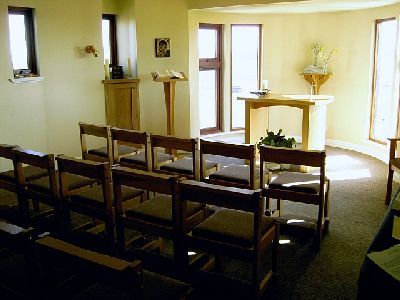 Within Cnoc a' Chalmain is a beautiful, simple Oratory, where the Blessed Sacrament is reserved. It is there for Mass, and for private prayer. It can be reached directly from the outside, for pilgrims not staying in the house.

To explain the profound significance of the Sacrament for Catholics. Fr Michael MacDonald writes:

"All Christians of whatever denomination celebrate some form of the sacrament of the Eucharist. But they believe different things about the Eucharist. For some it is simply a memorial meal when they remember the Last Supper and the sacrifice of Jesus on the cross, and share blessed bread with one another as a sign of their communion with each other. So when the Eucharistic celebration is over the bread and wine have lost their significance and any remaining is simply discarded and destroyed. For the Catholic and Orthodox Churches and, indeed, for many members of the Anglican Communion, the Eucharist is all the things that I have said above: memorial meal, sacrifice, and communion but they also believe that during the celebration the bread and wine actually become the body and blood of Christ and after the celebration is over they REMAIN the body and blood of Christ and are reserved with honour in a special place in the Church - the Tabernacle. Naturally enough, the reserved sacrament has become a special focus of devotion for Catholics since, in a very important way, it is the presence of Christ amongst us. Any permanent community of Catholics would wish to have the reserved sacrament as an object of devotion since it is the sign, above all others, of "Christ present among us, with us, and sustaining us."

The Cross of St Oran

The Cross of St Oran in stainless steel, made by Andy Fellows of Dervaig and mounted externally over the east window of the Oratory, was given by Peter and Sheila Stappard of Kintra, Mull.

The Plaque of The Seven Churches

The Plaque containing stones from the Seven Churches mentioned in the Book of Revelation, and other Christian sites, (placed outside, on top of the wall opposite the oratory door) was given by Ian Tweedie of Edinburgh.

The Celtic Cross of Iona marble in the Oratory was given by Mrs Jane MacFadyen of Iona, and carved by the Scottish Sculpture Workshop in Huntly, Aberdeenshire. Some years ago, Mrs MacFadyen's late husband had carried the whole piece of marble from the now defunct marble quarry in the south of the island, over rocks and bogs up to their croft in the far north of the island. When Mrs MacFadyen knew that the Trustees were looking at crosses of Irish marble she said we must not have a cross of Irish marble but one of Iona marble, which is now quite a rarity. This gift is deeply appreciated, and will be an enduring reminder of the generosity of this Iona family.

Other Gifts For The Oratory

The Tabernacle was donated by the parishioners of St Columba's Cathedral, Oban.

The Altar was given in memory of Anne Loudon by her family and friends.

The Lectern was given in memory of the sixteen children of Dunblane and their teacher.

Sacred Vessels and Books for Mass were given by Mgr. Euen MacInnes, formerly a parish priest of Argyll and the Isles Diocese.

A Chalice and Paten made by Louis Mulcahy Potteries of Ballyferriter, Co Kerry, were given by the O'Huallachain family of Dundalk, Co Louth.

A Chalice was given by Fr Stephen Collins.

The small Icons of Celtic saints were given by the Orthodox Church.

The large Icon of St Columba was painted and given in 2004 by Deacon Dieter Wegener of Germany.

The Vestments, designed and made by the Carmelite Nuns of Dumbarton, were donated by the Catholics of Our Lady, Star of the Sea, Tobermory; St Michael's, Ardkenneth, and St Bride's, West Gerinish, South Uist; St Cumin's Morar and St Patrick's Mallaig; and Mr Laurence Jones of South Wales.

In the diocese of Argyll and the Isles, twenty-five parishes and two religious orders have contributed.

Cnoc a' Chalmain, which means Hill of the Dove, was suggested by Mr & Mrs Anthony Dilworth.

The Colmcille Trust and The Iona Community

Once the purchase of the site for the house was confirmed and we knew it was going to be a reality, the Iona Community was very helpful and positive and showed interest and gave practical co-operation.

The Iona Community is a lively ecumenical Christian community; men and women who seek new ways of living the Gospel in the world today. The Community has three Centres; Glasgow, Mull, and Iona itself. In all three centres the community works for Justice and Peace in the world of today and has special areas of concern regarding Young People and Worship. They have been on the island now since 1938, when they rebuilt the ancient monastic buildings.

The Trustees hope that the establishment of the Colmcille Trust, together with the renewed availability of the Abbey buildings for Mass (now under the management of Historic Scotland), will strengthen Roman Catholic involvement on the island, and continue to encourage and to enable further growth in ecumenical co-operation and understanding.

Catriona Allan was appointed as the first Warden by the Colmcille Trust in February 1997. Under her stewardship, the House of Prayer in its first five years became an integral part of the island community and is fully engaged with the ecumenical process already established on Iona. In September 2002 Catriona left to join the Benedictine convent at Tyburn in London. She is now a Benedictine Sister based in Rome.

Sister Jean Lawson who was Warden for 15 years has now left to be with the Sacred Heart Sisters and Mrs Joss Brace is now Warden.

The Purpose of the Trust is to further the cause of Christian Unity through the development and establishment of a permanent Roman Catholic presence on the Isle of Iona, Argyll.
The establishment of the House of Prayer at 'Cnoc a' Chalmain' finally became a reality in 1994, the original purpose of the Trust remaining the same.
The Vision of the Trust is that people will come for a stay to experience peace and quiet. The Oratory, where the Blessed Sacrament is reserved, is readily available for everyone as a place of quiet prayer.
It is also envisaged that 'Cnoc a' Chalmain' will be involved with the ecumenical movement already established on Iona, leading to a deeper understanding of Christian traditions, and working to fulfil our common commitment to Christian Unity.
It is the aim of the trust that 'Cnoc a' Chalmain' will become an integral part of the island community, working for the well-being of the whole island.